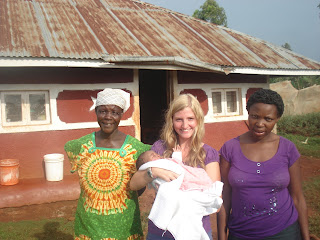 Hello friends! I can’t believe a whole month has gone by in Kenya. Time is flying over here! Campus life has been great. I’ve been attending some classes in the department of community resource management, which has helped me gather a better understanding for the needs on the ground in certain areas. Classes look the same as those in Canada except that there is usually a chalkboard (sometimes a whiteboard) instead of a power point presentation. The classroom facilities aren’t great and library resources are limited in that you cannot always find current information. One class on youth and development has been helpful in the sense that it also applies to women and covers the benefits and challenges of forming self-help groups. I will be travelling to the rural village of Oyugis this week to begin my research on two women’s self-help groups (in the yogurt kitchens).

I got paired with a student here doing her Masters on the challenges that women’s self-help groups face. She has been a great match, helping me design a questionnaire for me to take with me to the yogurt mamas in Oyugis. I’ve also been attending some seminars to learn about the research Kenyans are doing right now and how my work can be of use to them. I’ve had the opportunity to join a Masters student in the field. He is looking at motor skills and general athletic ability in primary school children so we visited a school and had the children complete an obstacle course as well as other various athletic tasks. It’s been so interesting taking part in the different kinds of research studies going on around campus and comparing them to research in Canada.

There are things that students have to consider here – things that Canadian students likely never thought of. For instance, most students here do not have a computer but all their assignments are expected to be done on the computer. A student can rent a computer to type up their work, use the library computers (but there aren’t many because of the large population) or they can hire someone to type their work (from paper) for them. Paying someone to type your work is more appealing to some students because they have poor typing skills (they haven’t grown up using computers) so the task would take them very long to finish. However, there is a risk to paying someone at a cyber café to type your work because they have underground businesses where they might sell your work to other students. It’s these little things that we take for granted at home, the little things that make Kenyan life so time-consuming. Things take time to do around here. The Internet connection is very slow, you walk everywhere, cooking, washing your clothes by hand, etc. The good thing about time here is that you’re never really late for anything. You show up whenever you do and people don’t ask for explanations. Downside though is if you’re waiting for someone, you can’t be impatient if they don’t keep time.

Most Kenyans are very interested in learning about my lifestyle in Canada. I’ve spent a considerable amount of time trying to minimize some of the stereotypes they have of white people. They think every White is rich, carefree, possibly lazy, and without problems. I had to explain to one Kenyan, who is an educated university student, that we also have problems with domestic violence. She thought that these “primitive issues” only occurred in Africa. She was so shocked to hear that such things happened in the “developed world”. It’s also hard trying to explain to Kenyans that we also have poor people because they simply don’t believe you.

Other than that, I’ve been playing soccer with the women’s team here and it’s been awesome! The coach is amazing, she used to play on the national team for Kenya and she’s crazy fast. Most of the players are super fast but not as skilled with their ball control. It’s funny always being self-aware that you’re the minority, as in the only white girl around. I definitely stand out on the team but I still love it! I’m hoping I’ll still be able to play when I’m in Oyugis because I’m really going to miss the team here. I’ll miss going to my supervisor’s house for dinner too. I’ve been trying to learn how to cook Kenyan dishes but it’s been tricky since I’m not much of a cook to begin with. I also got introduced to the African version of American Idol at that house, which is hilarious because they have their own Simon judge.

I joined a group of California students, who are doing an exchange program, on a trip to the coast! I was so happy to be traveling back to where I had stayed in Kenya last year. I saw my host family again and went to the primary school where I had taught English. I got the warmest and friendliest welcome I think I have ever gotten. I’ve never shook so many little hands before in my life. The children were shouting “teacher, teacher” or “Madam Ellissa Karibu (welcome)”. “Asante (thank you)”. I organized a teachers versus students volley ball and football game, which is practically unheard of in Kenya.  Students often fear their teachers because if they do anything wrong (e.g., don’t do their homework or don’t keep their uniform clean), they get beaten by sticks on their hands, feet, or back. I figured the children might fear their teachers less if they played with their students. Everyone loved it – those that played were happy and those that watched got to laugh at their teachers when they would mess up with the ball. I’ve played many games in my life but I have never played in front of such a large crowd before (there are just over a thousand children at this school).

The opportunity for organized sports here is limited to those that live in the city and have a lot of money. Most children have never played any form of organized sports and since that has been such a major part of my life, I tried to do what I could to make it as official as possible. We marked lines on the field (using ash) and I brought whistles for the referees. It was definitely different compared to the games these rural children are used to playing, with their footballs (soccer balls) made of garbage bags and string. I hope that the teachers will continue playing with the students after I leave. They are very busy though, they typically have approximately 60-70 students in their class, which means marking 60-70 assignments every day, with little to no resources/teaching materials. These people in the villages work very hard and inspire me to do the same!

So my trip to the coast was amazing! I got to go to the beach with my host family and Kenya has the most amazing beaches you have ever seen. When people would ask my host family why they were with a mzungu (white person), they would say that I was their daughter, so I was honored. My host father would tell me that he will get a lot of cows for me (Kenyans have dowry) when I get married. I love traveling to the villages and learning about all the different values and customs of each tribe. For example, the Digo from the coast believe that you should not hit a cat (or any animal) because it might be your neighbor. They don’t mean it in the same way that some people believe in reincarnation. They believe that your neighbor may have been temporarily transformed into a cat by a witch so it’s better to not hit the cat, because your neighbor might wake up in pain the next day as a human again. This might seem completely crazy to your average Canadian but these beliefs are still very much a part of culture in some Kenyan tribes. There is so much to learn in the villages. I can’t wait to begin my next adventure in the village of Oyugis…
Posted by Ellissa at 05:10 1 comment: 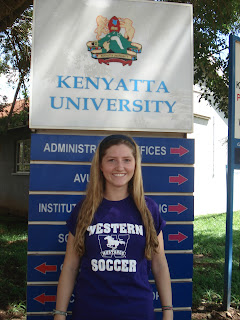 Ellissa
I'm a MEd Counselling Psychology student and a member of the varsity soccer team at the University of Western Ontario. I'm traveling to Nairobi and Oyugis, Kenya for 3 months as an intern with Western Heads East.